TV Lanka has launched their very own DVB-T pay television service with coverage limited to the colombo city limits. The channel list consists of a mix of HD & SD feeds. However it should be stated that the HD feeds are been broadcast to the subscribers as SD feeds and not in HD quality.

A problem we see with this is that in the case of the Taj Television channels they broadcast only Ten HD & Ten Cricket. The major disadvantage is that not all the programmes on Ten Sports is available on Ten HD since Ten HD broadcasts a mixture of content from Ten Sports, Ten Cricket & Ten Action. So it would have been better for them to add Ten Sports & Ten Action as separate channels instead of Ten HD. We see this repeated a few times with other channels too. We hope they review their channel lineup and do the needful to rectify the situation. 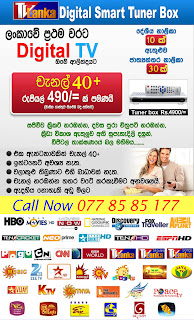 Given below is the channel lineup of the DVB-T service

This is an interesting experiment. While a normal UHF antenna is not capable of capturing HD quality, the quality difference between HD and HD should be apparent. Another interesting scenario is that for screens up to 42”, the difference may not be apparent. Thus this could be a good option for those who have flat screens up to 42” inches and do not want to pay thousands for HD to improve their viewing experience. The HD channels should provide 16:9 pictures with better quality than SD channels. I have not seen the quality so I would not know about the picture issues. However, if there are no major mishaps, the technology provides considerably high quality pictures. Interesting experiment by a smaller player and wish him all the best. DTV and SLT made a mess out of pay-tv market so far. Hope TV Lanka does a better job.

This whole thing sounds pretty dodgy. Like back when Comet Cable was advertising their digital service.

The price is ridiculously cheap for the channel set (which includes premium movie and sports channels). Also I doubt the HD channels are allowed to be provided as SD feeds. And obviously they are trying to cheat customers by not clearly mentioning that the HD channels are not real HD broadcasts.

I wouldn't be surprised if the whole thing is a scam. The advertisement is pretty bad as well, since this is not the "first Digital TV in Sri Lanka".

I will give you the breaking inside news.

Technically speaking, none of the statements of the advertisement is wrong. This is the first digital TV experience in Sri Lanka (DVB-T). Dialog is satellite TV while SLT is IPTV, two different broadcasting protocols. Ruhunu Multivision (Comet) was in analog microwave. They were promising the customers that a digital conversion will take place but this did not happen.
See, it is not that they are broadcasting HD channels in SD. Through a general UHF antenna, you cannot technically capture HD but high quality pictures can be captured. Another issue is that HD channels are broadcasted in 16:9 format and SD is in 4:3 aspect format. So there will be a difference in the picture aspect. SD and HD format difference is noticeable only in screens bigger than 40”.
Considering the above facts, this is a pretty good deal. Continuity, I don’t know. But TV Lanka place has been around for a considerable period of time and is one of the prominent satellite and broadcasting equipment providers in the country. So I guess they have the knowledge in the industry to do this right.
I really wish they do this right, after DTV and PEO destroying the pay TV market of the country.

@Unknown
Digital TV is essentially any video and sound transmitted as 0s and 1s (you must be knowing the basics). So even Dialog and PEO are digital. So it's not the "first Digital TV in Sri Lanka".

Your point about the UHF antenna not capturing HD is completely wrong. The difference between SD and HD is the amount of bandwidth needed. Either way the video is broadcast on the UHF band. The antenna is designed to receive UHF, and it can receive any UHF signal regardless of whether it is digital/analog or SD/HD.
The actual limiting factor here is the decoder unit. The decoder is built according to what sort of signal you want to decode. So the antenna can be the same and all you need is to get the appropriate DVB-T/DVB-T2, SD/HD, etc. decoder.
The quality of the picture depends on the compression and encoding used by the broadcaster, and also on the quality of the signal reaching your antenna. So terrestrial broadcasting is not much different to satellite in terms of picture quality.

And it is certainly possible to see the difference in HD and SD television on a 32" screen. I can testify to that.

Also I must note that the people running TV Lanka were responsible for the entire CBN Sat issue back in 2006, which ultimately resulted in Dialog taking over the service. I highly doubt that TV Lanka is going to do much better, and their price is still ridiculously low for the service they provide. I also doubt that they will recast the HD channels in 16:9 SD.

If they are actually sourcing channels from Videocon, it's probably illegal and we can expect many complaints from the content broadcasters.

DVB has many Variant. They are DVB T&T2 (for Terrestrial), DVB S&S2 (for Satellite), DVB C (for Cable) and IPTV also DVB system that use internet protocol.

Does any one have experinced this TV Chanells? I was trying to contant them several times no one is answering the phone?

How can we veryfy this

They are broadcasting HD channels in HD Quality. But now they have only issuing SD Decoders. They replace them with HD decoders free of charge once they officially launch!
They broadcast 4 channels from Videocon until they finalize their license agreement with those channels.

Can You Provide Srilankan Local Channels In HD Quality??

Want International Channels In Singpoor Trasponders...
Dont Give Indian Local Tranponders To Us.. pLEASE GIVE Singpoor Original Tranmission To US!

i'm using this but star cricket hd and star movies not available.there is no hindi movie channel to watch.star plus boring.

The service of the channels are soo bad, there are loads of audio out of sync. I wish I had not purchased this. Also they charged me for installation 1700rs , there was two old gentlemen who came to fix this, bless them, they couldn't even hold the ladder, we had to do the installation our selves. All in all I suggest not to purchase this as the quality is very poor.

CAn i use dvb -t channel in srilanka through dvb-t android device. If you say yesm how to use?
O can't find srilanka in country list of pad tv

Everest Base Camp luxury Trek provides ample time for important acclimatization. Furthermore, frequent acclimatising gives more chances to enjoy successful treks in the Everest region. A wonderfully scenic flight to one of the world’s highest airstrips – Lukla, opens to an alpine world of exceptional beauty. The air is so pure and colourful prayer flags flutter from rooftops, welcoming you to this sublime region.
The well-marked trail takes us through the well-known villages of Namche and Dingboche as well as Tengboche monastery; which reflects the true Sherpa culture. In addition, we make an ascent to Kala Pathar at (5545m). This is the point we get to view the famous climbing routes to the legendary summit of Mount Everest.

This forum is dedicated to highlight the happenings in the Sri Lankan Broadcasting Industry and also keeps you updated on happenings Internationally also. We will also provide certain Program Highlights, Technological Uses and anything related to the broadcasting field locally and Internationally. We will focus mainly on Sri Lanka since this is a Sri Lankan forum.